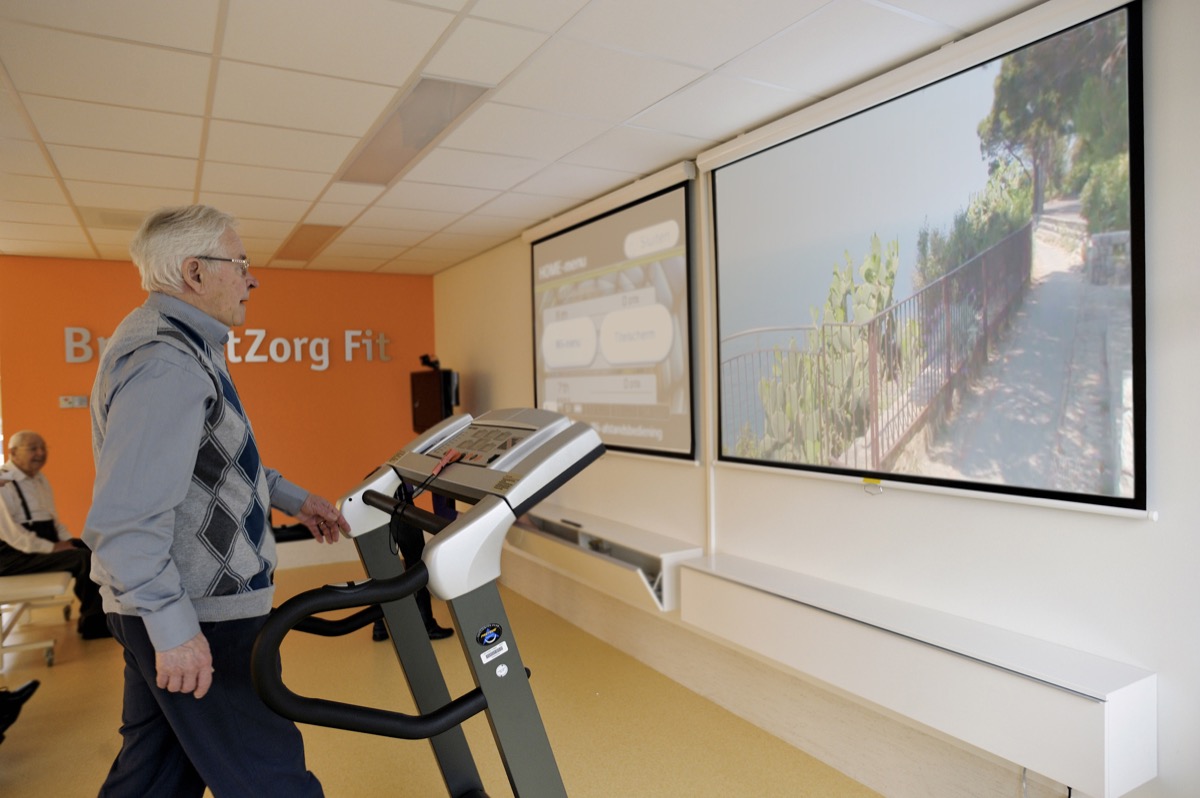 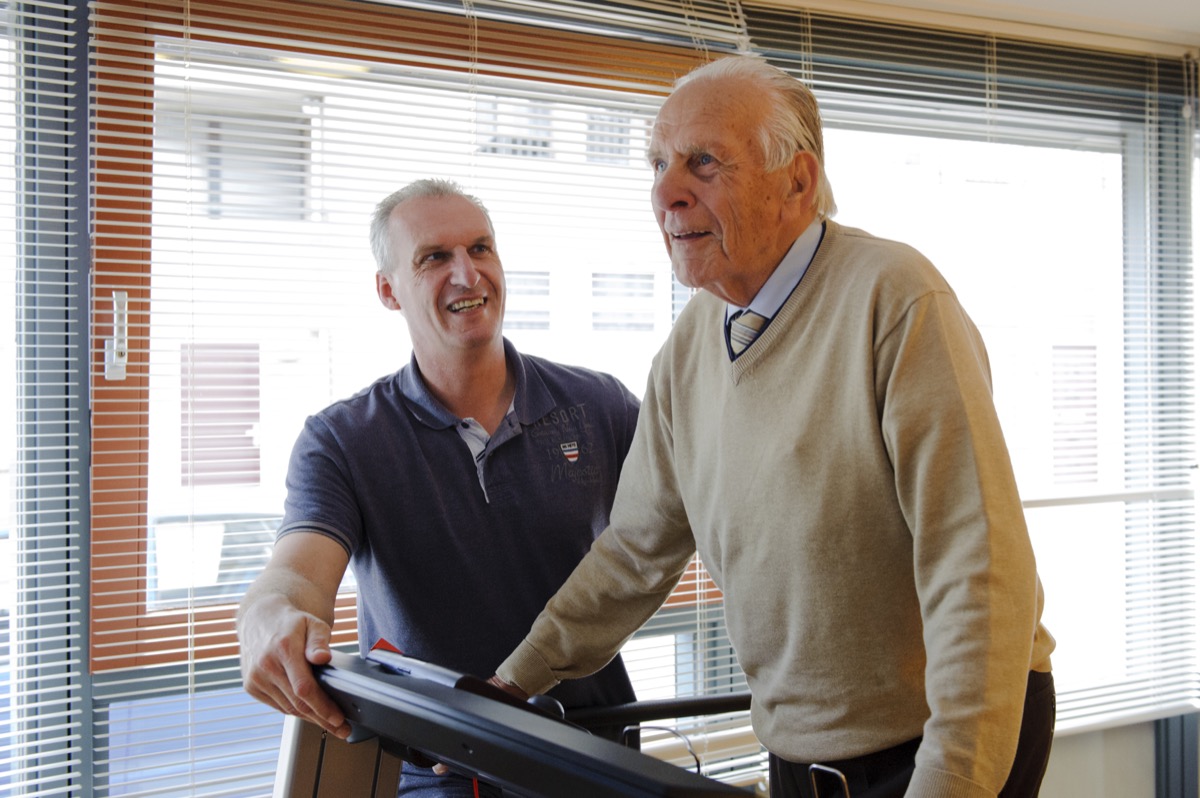 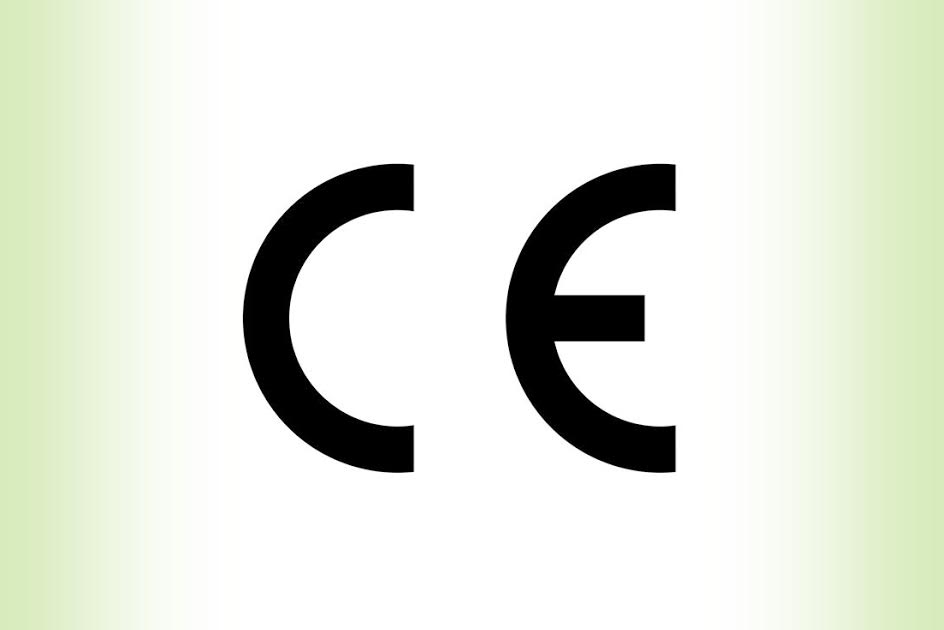 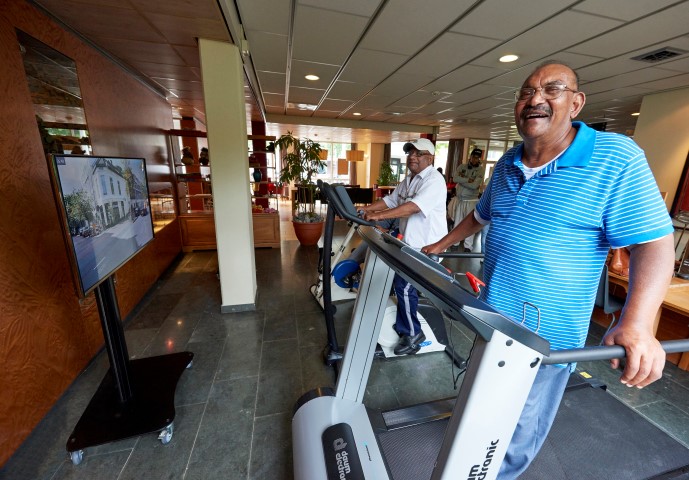 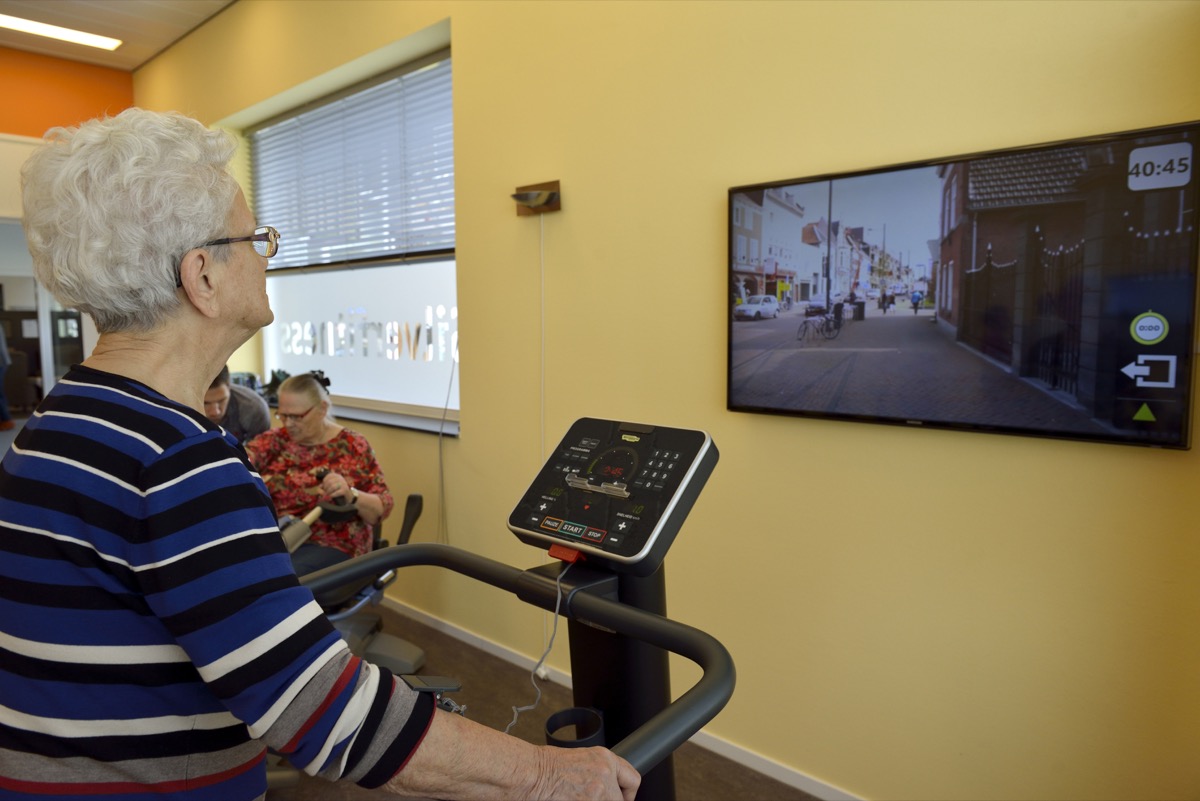 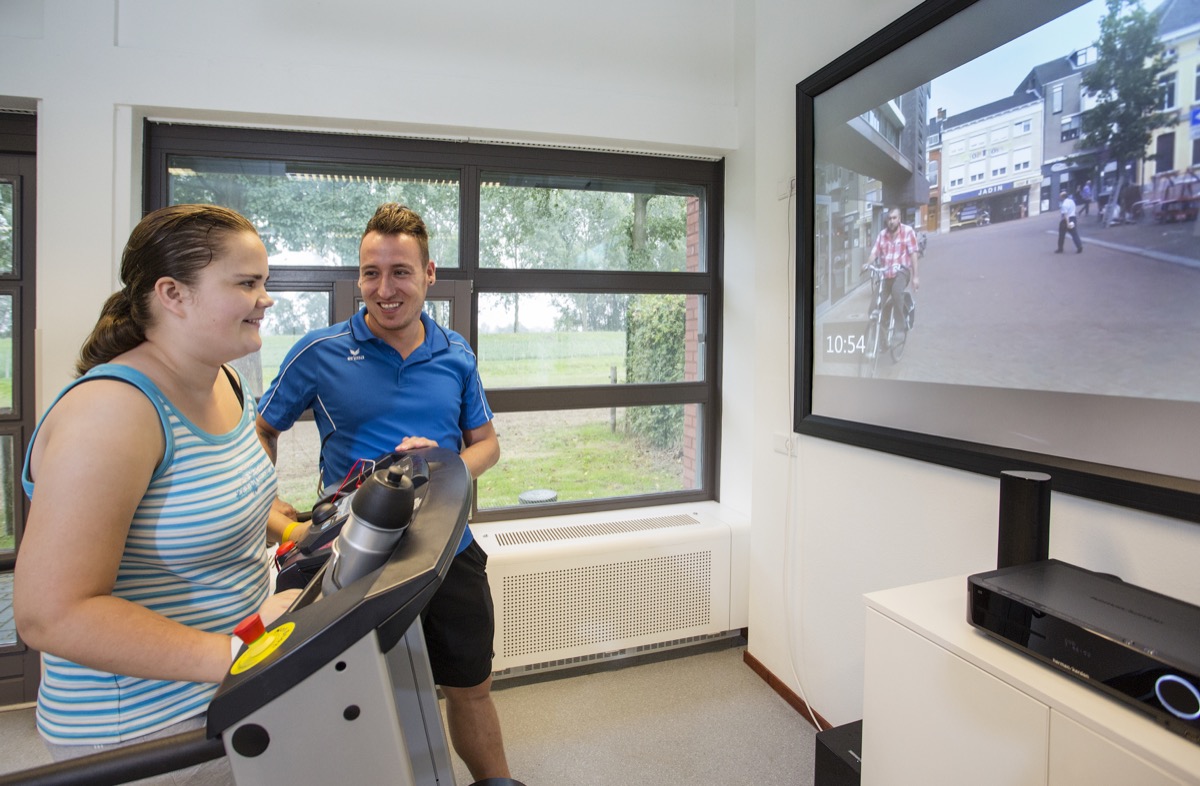 Gait training is an important element in many rehabilitation and activation programmes. Unfortunately, walking on a treadmill is far less motivating than actually going outside. The SilverFit Mile projects a film, so that the indoor experience resembles walking outside as much as possible. The aim is to increase the duration of individual sessions and improve therapy adherence. The SilverFit Mile can be connected to any treadmill.

The SilverFit Mile for gait training is installed onto a treadmill. It is also possible to connect the Mile to more than one apparatus at a time. A route is shown on the big screen in front of the apparatus. The speed at which the film plays is determined by the speed at which the user moves. This gives a feeling of actually exercising outside.

The SilverFit Mile is a CE certified medical tool. This means that it has been through a lengthy control process to establish the system’s operation and avoid any possible risks. Besides the fact that this certification is mandatory in healthcare, it also brings with it many practical advantages. For example, it is important that the speed of the films adjusts automatically and that the imagery does not move or jolt. If it moves too much it can cause a risk of falling. SilverFit installs the entire system at your location and offers good quality and service. We are also happy to advise you when purchasing a new treadmill.

The screen is impressive and immediately attracts attention. The user is absorbed into the experience. The film is not animated, but recorded live with a camera creating a unique and realistic experience. People who are present in the room, but not actively participating in the exercise enjoy looking on. This results in conversation and increased social cohesion. There is a wide range of routes, through towns, countryside and unique locations such as Amsterdam, Paris, Ravello, Patagonia, Swiss Alps and Schiphol Airport.

As the user is focused on the experience, they are likely to walk longer because they lose track of time. People often aim for a specific goal in terms of the film, such as, ‘now I am going to walk to the church’. As their attention is focused on the screen and not on the control panel, they are more likely to walk in an upright position. It is also possible to do a route in different stages, carrying on where the user left off the last time.

Virtual therapy for walking or cycling leads to better results  on cognitive tests and balance parameters, higher exercise adherence, quicker achievement of training goals;  and in addition, people enjoy it much more.

A study by Anderson-Hanley et al. (2012) explored the effect of  exercise on cognitive function in older adults. They looked  specifically at executive functions such as planning and divided attention. To identify this effect, three tests were used. The  results (see the below figure) show that the group that cycled  with virtual images (with VR) showed a significantly better cognitive performance than the control group.

Cho and Lee (2014) showed that using virtual images has a positive  effect on balance during walking. Compared to the control group,   the vr group scored significantly better after the intervention  with regard to the parameters and test, shown below.

Chuang et al. (2006) showed that walking with virtual images function has a positive impact on achieving fitness goals. After a coronary  bypass, one of the training goals was to reach 85% of maximum  heart rate. After 20 training sessions, it was observed that less  than half of the control group had achieved this. However, almost  all of the VR group achieved this goal. Moreover, the vr group  achieved this after 10 training sessions.

Feenstra (2013, unpublished) studied the effects on exertion enjoyment while cycling with or without virtual images using the SilverFit  Mile. The results show that patients enjoyed cycling with  images much more than without.  The addition of virtual  images to cycling in most cases improved exertion tolerance  as well.

There is a number of research done to  the effect of video images on balance and equilibrium. Every research stress  the importance that the images connect closely to the subjective movement experience. Research done by Nishiike (2013) for example, analysed the speed of the film and pointed out undesired movements of a video. Especially movements in which the horizon rotates too much or gets shaky and wobbly can cause a nauseous feeling similar to seasickness. Bonato (2009) describes this effect with healthy 19 year old participants.

SilverFit has therefore developed a specific methodology to avoid these kind of shaky movements. A film is recorded with a scoot mobile that is adapted for this purpose and uses a self-stabilizing camera. Furthermore, all images are edited afterwards with stabilisation software and tested by a person who is highly sensitive herself for the above described effect. In this way we can be sure that the videos we record do meet the very strict requirements of a medical device

The SilverFit mile includes an enormous diversity of films recorded worldwide. A route lasts in between 30 - 70 minutes . A film can start at several moments in the route to enable to create a different experience during each session. Many people enjoy cycling in their own familiar environment. You can order a film to be made of your environment which SilverFit can then integrate into the SilverFit Mile.